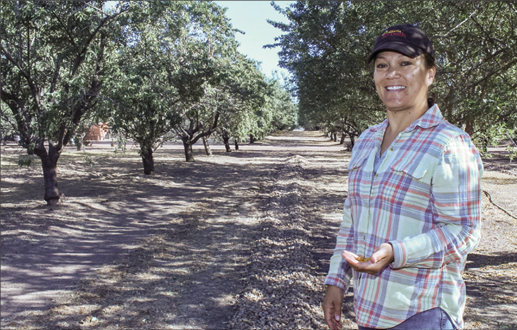 California’s almond production is expected to drop to 2.6 billion pounds this year due to drought and a bloom-time freeze in February that severely impacted almond-producing counties.

California’s almond production is expected to drop to 2.6 billion pounds this year due to drought and a bloom-time freeze in February that severely impacted almond-producing counties.

While almond production is forecast at 11% lower than 2021, some growers suffered significant losses.

“Area-wide, the freeze has been very impactful. Almond crops are off 30-40%. Some areas in the county are a complete loss,” said Colusa County almond farmer Nathan Peterson, who also works for Chico Nut Co., a grower-processor of almonds and walnuts. “As a processor, we are running shorter weeks and really trying to minimize overtime due to the uncertainty of what remains in the fields. It is a really challenging year.”

The U.S. Department of Agriculture Risk Management Agency reported $35 million in indemnities have been paid for almond crop losses this year, with more than 91% of those attributed to the freeze. Top almond-growing counties in the north, Colusa and Glenn, suffered almond losses of $209 million and $150 million, respectively, according to agricultural commissioners in the counties.

In Glenn County, organic almond grower Marlene Silveira of Orland said her farm is about halfway through harvest, with some orchards impacted by the freeze and others unharmed.

“Our almonds are on hill ground, so where it’s higher, they look great, but on the low ends where the cold air sinks, there’s no nuts on the trees,” Silveira said. “We’ve only harvested half of our crop, but as of right now, we’re down at least half of what we did last year.”

Silveira has crop insurance but must wait for production totals to determine if the insurance will cover the loss or if she will be paid market value.

In the Central Valley, Merced County farmer Justine Pitts grows about 750 acres of almonds, including nonpareils, a variety representing about 40% of the state’s total almond production.

“We just started picking up (the crop), and that specific (nonpareil) block is down about 15%,” said Pitts, whose family began harvesting near Ballico last week. “We are seeing that the crop size is reduced this season and nut size is smaller. The crop is not decimated, but it is certainly lighter.”

Frost damage to almonds in Merced County, she said, is not as widespread as in other counties. She said affected growers expect to leave some orchards unharvested.

Almond farmers reported seeing lower yields, smaller kernels and “blanks,” which means no kernel was formed. A benefit from high temperatures, however, is faster drying of almonds and more efficient harvest.

Pitts said she expects the almond price will be lower this year than the $1.76 per pound USDA reported for 2021.

“We have five varieties—nonpareils, Carmels, Montereys, Buttes and Padres—so our average price may be $1.67 a pound,” Pitts said. “Growers are price takers. We could all stand as an industry and say, ‘No, we’re not going to do it for this price.’ But really, you’ve got to have money to operate. So, we’re surviving.”

With fewer almonds on the trees but more than 800 million pounds left in inventory from the 2021 crop, “our overall supply this year is about the same as last year,” said Richard Waycott, president and CEO of the Almond Board of California.

“We entered August with a record carry-in from the prior crop year, so that inventory needs to be worked through in addition to the new crop coming on,” Waycott said. “The outlook is gradually getting better, but we still have very low pricing in our industry because of the backlog.”

Nut crop leaders say they continue to work through logistical challenges, such as port slowdowns and backlogs, that in recent years delayed delivery of California nut crops into export markets. Getting produce to global customers is critical, as California produces more than 72% of the world supply of almonds.

“Our industry was able to be ingenious and find different ways to do things,” Waycott said.

Those steps included identifying nontraditional routes for almond shipments, such as through ports in Southern California, the Gulf of Mexico or the East Coast. By developing alternative shipping solutions, the state’s almond sector saw increased export shipments.

This included an all-time record for June, which Waycott said “was the largest month in terms of volume that we’ve ever shipped.” A trucker strike at the Port of Oakland, however, impacted July export shipments.

“Despite all of the hurdles that we’ve had to jump over and hoops we’ve had to jump through over the last year to year and a half, we were able to ship at the second-largest shipment level in our history,” Waycott said, adding that the sector has experienced significant growth in the Middle East and Europe and good demand in most export markets.

“In aggregate, these are impacting price and purchasing power,” Amin said. “The recession is another headwind which, once it starts and makes one person cautious, it just becomes a vicious circle, and all of a sudden, we all become very pessimistic and stop purchasing.”

“A certain percentage of customers understand that these nuts, besides being delicious, have nutritional value and all kinds of health benefits,” Amin said. “We hope that we can increase this percentage, and hopefully that makes a difference in (almonds) becoming a staple vs. a luxury good.”

Looking ahead to the 2022-2023 crop year, Waycott said, “Hopefully, we see better precipitation this winter and get the supply-demand equation back in line, so we can go about doing what we do best, which is growing a wonderful food product and shipping it to consumers around the world.”