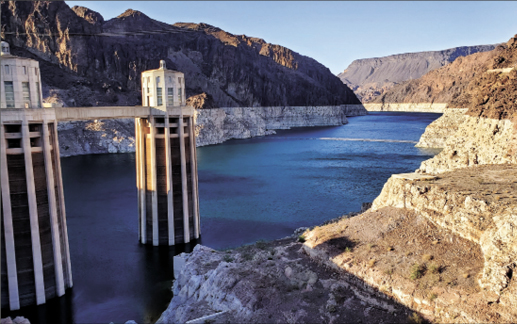 Imperial Valley farmers who have senior water rights on the severely depleted Colorado River say emergency water delivery cuts ordered last week by the U.S. Bureau of Reclamation do not go far enough to achieve the agency’s goal of conserving water for the river’s future sustainability.

The new restrictions aren’t directed at agriculture in the Imperial Valley. Yet fears mount that farmers, who are already cutting back their water use, could lose critical irrigation supplies if an accord on 2023 water diversions isn’t reached for multiple states and agencies relying on the river.

“Two months ago, (bureau officials) said they needed 2 million acre-feet to 4 million acre-feet to solve the problem, in addition to the tier cuts,” said Imperial County farmer Ronnie Leimgruber, who farms in the Imperial Irrigation District and is based in Holtville. “They’re kicking the can down the road, allowing junior water-right holders to overrun their allocations, and this exacerbates the problem.”

Prolonged drought conditions and historically low reservoir levels at Lake Mead and Lake Powell, which store water from the Colorado River and the two largest reservoirs in the U.S., have triggered water cutbacks for junior water-right holders, including those in a few western states.

The Colorado River system supplies drinking water and irrigation to 40 million people across the upper-basin states of Colorado, Wyoming and Utah, and the lower-basin states of California, Arizona and Nevada. Water is also shared with Mexico.

After states failed to reach an agreement to conserve water as requested by the bureau, the agency last week issued 2023 operating conditions for Lake Powell and Lake Mead, including a 21% reduction for Arizona, 8% for Nevada and 7% for Mexico.

“The Colorado River basin is in its 23rd year of historic drought,” said U.S. Bureau of Reclamation Commissioner Camille Calimlim Touton, during last week’s press conference. “Both Lake Powell and Lake Mead, the two largest reservoirs in the United States, are at historically low levels, with combined storage of 28% of capacity.

“The system is approaching a tipping point,” she added, “and without action, we cannot protect the system and the millions of Americans who rely on this critical resource.”

Imperial County farmer Larry Cox suggested that if the bureau applied another tier of cutbacks, that would have conserved another couple hundred thousand acre-feet and included California in water cuts.

Cox said action taken by the bureau will not lead to “enough water to address the shortfall of all the hydrology on the Colorado River,” adding there won’t “be enough water to stabilize customers, unless we have just an absolute monsoon or huge inflows of snowpack and rain over the next seven months.”

A major diverter of Colorado River water is the Metropolitan Water District of Southern California, which serves 19 million people in six counties.

In a statement, MWD general manager Adel Hagekhalil said, “This is not simply a drought that will end, allowing reservoir levels to recover on their own. This is a drying of the Colorado River Basin. We are all going to have to live with less. Working together, we know we can meet that challenge.”

Although Imperial Valley farmers have senior rights to the Colorado River, Leimgruber said he is worried the region’s agricultural sector could be in jeopardy if the situation worsens. That’s because, unlike other Colorado River water users, he said, “we have no other source of water.”

With the river oversubscribed, Imperial Valley farmers say they are concerned they will be asked to give up more water beyond what they have already contributed.

“Farming communities are continually sacrificed in Imperial County for the benefit of everyone else,” said Imperial County farmer Mark McBroom, chairman of the IID Agricultural Water Advisory Committee. “Our community has been struck by a long-term disaster,” he added, pointing out that water has been taken from “a very productive valley” that, along with Yuma, Arizona, produces the majority of the nation’s winter vegetables and forage crops.

Imperial Valley farmers have seen their water allotment reduced to 2.6 million acre-feet. Since 2003, the district has participated in a quantification settlement agreement and has conserved more than 7 million acre-feet of water. This year, IID implemented an equitable distribution plan that adds further on-farm conservation measures.

Imperial Valley farmers say they have had to fallow ground and stop irrigating crops because they ran out of water.

“Our community can’t handle another cut on water,” Leimgruber said, noting about 40,000 acres in the Imperial Valley have been idled. “We are fallowing ground and not irrigating it because we don’t have enough water to irrigate all our ground.”

Due to drought, Cox said, “All of us have changed our farming practices to anticipate a limited supply of water.”

When announcing the 2023 reservoir operations, the Bureau of Reclamation also highlighted that $3.8 billion in federal funding is available to support water management and conservation in the Colorado River basin.

The funding, to be administered by the bureau over the next four years, comes from the Inflation Reduction Act signed by President Joe Biden last week.

“The $4 billion will come into play in terms of what kind of plans could be put in place and projects funded,” said Imperial County Farm Bureau executive director Rachel Magos. “When there’s fallowing, the economic impacts to our community, our service providers and our farmers is huge, so there has to be some backstop funding.”