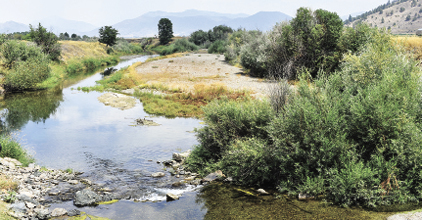 California farmers and ranchers affected by a third consecutive year of drought and related emergency curtailments of water deliveries have planted fewer acres, fallowed fields or reduced livestock herds to make it through the season.

“For the cow guys...with the combination of drought that is preventing people from growing pasture and the very high hay prices and high cull-cow prices, there’s just been a flood of good brood cows going to market,” Walker said. “Before (the drought) there might have been a dozen guys with over 400 cows or more, but I would expect that our cow numbers are going to be down in the Shasta Valley over 25%, which guys may never build back up.”’

The challenges for farmers and ranchers in the region represent only a fraction of statewide impacts on agriculture from sustained drought and severe cutbacks in water deliveries.

In the Scott and Shasta river watersheds, updated drought emergency curtailment regulations were readopted July 29 by the state water board. The continued curtailments were outlined as part of a hydrology update by Jose Ayala, an environmental scientist for the agency, at last week’s board meeting in Sacramento.

“Water-right holders are conditionally curtailed under the order and are required to coordinate diversions with the Scott Valley and Shasta Valley Watermaster District and state water board as applicable,” Ayala said.

For those relying on the Shasta River side, Walker said, the regulation means higher and higher-priority water users will be curtailed, and for the Scott River, it means flows are going to drop.

State Water Board Chairman E. Joaquin Esquivel said “our communities are facing multiple emergencies” from both drought and recent wildfires.

Any water-right holders in Siskiyou County who had to evacuate due to the McKinney Fire, Ayala said, may contact state water board staff at their earliest convenience.

Walker said the curtailment’s moratorium on open-ditch stock watering is concerning given the fire.

“If we have power outages, which we’ve had with this fire, how’s that going to work with guys that are pumping in order to water stock? There’s a lot of uncertainty,” he said.

The layer of smoke in the air from the fire, Walker said, dropped triple-digit temperatures to the high 80s, which may help water flow due to less evapotranspiration.

Elsewhere, the water picture in the Russian River watershed in Mendocino and Sonoma counties is being impacted by the late-July approval of a variance by the Federal Energy Regulatory Commission. The variance mandates reduced flows from the Potter Valley Project to preserve cold-water resources for fish on the Eel River.

Depending on anticipated curtailments for the upper Russian River, she said there could be challenges in sizing of later wine varietals or post-harvest irrigation for orchards.

“In the Redwood Valley, this is the second year that the water district has not been able to provide any water to their agricultural customers,” Boer said. “For those who don’t have any alternative water sources, decisions had to be made to reduce plantings of annual crops, thin fruit on permanent crops such as winegrapes or, if economically viable, haul water in.”

For those without a portfolio of water sources, such as use of recycled water, Boer said, “the timing of this year’s curtailments will once again prove to be a challenge for retaining the viability of the vines and the quality of the fruit over the next several months.”

“It’s been dry for a couple of years in a row. Variable hydrology is something that we can cope better with, with some planning and some execution,” Scheuring said. “Climate resiliency is the watchword in so many ways, yet it seems like we’re moving awfully slowly in getting some of the known solutions across the finish line.”

Water-right holders can learn more about emergency curtailment orders for their watersheds at www.waterboards.ca.gov/drought/regional-drought-response/.