A changing market gets a more durable cantaloupe 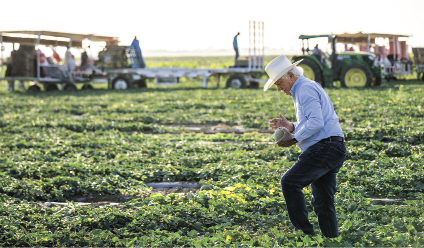 Faced with pressure from grocery retailers and increasing labor costs, the California cantaloupe industry has transitioned from familiar Western shipper varieties to ones with a longer shelf life.

The newer varieties—referred to as extended shelf life and long shelf life, or ESL and LSL, respectively—also offer a potential to reduce food waste. But vegetable breeders face a challenge: The newcomers just don’t have the same flavor and aroma of the Western shipper melons.

“Flavor and yield have been an emphasis, and I think yield trumped flavor for some time,” said Garrett Patricio, president of Westside Produce in Firebaugh. “But flavor has come full circle. (The breeders) understand people have been frustrated or concerned about the varieties we’re growing.

The family-owned grower-shipper began transitioning to long-shelf-life varieties in 2015 with about 30% of its acreage. By 2018, it had expanded to about 50% to 60% LSLs. Today, Westside Produce grows no Western shippers.

Patricio said the company typically begins with ESL varieties, then switches to LSLs for the bulk of the season. It grows several cantaloupe varieties based on experience with their performance during different parts of the season.

Joe Del Bosque, owner of Del Bosque Farms in Firebaugh, was one of the last Western shipper holdouts. Last year marked the final season he grew the older type commercially. He said increasing production costs forced him to plant long-shelf-life varieties this year.

But Del Bosque keeps a small patch of Western shippers for his fruit stand near Interstate 5 and Shields Avenue.

“It’s just an economic thing,” he said. “We can’t continue with the Western shipper and compete with all of those who have switched over to the LSLs.”

Fields of the older variety ripened over a drawn-out period, requiring crews to make 10 to 14 harvest passes across the field, Del Bosque said. With only a five- to seven-day total shelf life, if farmers missed picking Western shippers one day, that reduced the melon’s overall longevity by about 20%. Fruit that was ripe one day could be over-mature if they skipped a day.

The long-shelf-life varieties, on the other hand, hold up better in the fields, allowing growers to make only one to four passes. In addition, Del Bosque said many of the newer varieties have better yields and more uniform fruit size.

When the minimum wage was $11 an hour, he said, Western shippers still penciled out because he grew them for premium organic markets. Four years later, the minimum wage is $15 an hour. Coupled with the 40-hour overtime threshold, Del Bosque said it made the older varieties unprofitable.

“Western shippers have to be picked every day, and you can’t pick every day and do it on a 40-hour basis,” he said. “With the LSLs, we can skip a day or two days, and they’ll weather it OK.”

The newer varieties were bred using traditional cross-pollination techniques, with LSLs producing significantly less ethylene, a natural plant hormone that controls ripening. This allows them to last longer in grocery stores and in the refrigerator.

Extended-shelf-life varieties have a shelf life of 10 to 14 days under optimum conditions. But LSLs can last up to 20 days after harvest, according to information from the California Cantaloupe Advisory Board.

Reduced ethylene production also is why LSL varieties have firmer flesh, a harder shell and lack the old-fashioned cantaloupe aroma. But the melon’s firmer flesh lends itself to fresh-cut fruit products.

Patricio said he’s seen increased sales from food service, whether the melons are cut in half or offered as cubed fruit.

“It’s been a preferred item for our fresh-cut guys for years,” he said. Whereas Western shippers had pressures of 5 to 6 pounds, LSLs may be 7, 7.5 or more. The higher the reading from a fruit penetrometer, the firmer the flesh.

Reduced ethylene production also has affected how crews harvest LSL varieties. Western shippers were considered mature when the melons separated cleanly, or slipped, from the vine. Consumers were taught to look for the slightly indented nickel-sized green circles where the stems used to be.

ESLs may either be forced slipped or clipped, depending on the variety. LSLs, on the other hand, don’t slip, and harvest crews have to clip them from the vine.

Patricio said they now clip all cantaloupe to cater to some retail buyers who considered the slip to be a defect.

Determining LSL maturity, which involves looking for netting on the stem and slight cracking on the blossom end, is more difficult, Del Bosque said. They also may be slightly green when mature, unlike Western shippers that turned cream or even light yellow when ready to pick.

“The indicators are much more subtle,” Del Bosque said about long-shelf-life varieties. “We’ve done some of these before. What we’ve trained our people to do is get as close as maturity as we can. The drawback is if you let them get overripe, the flavor starts to change.”

Mark Frahm, a Woodland-based melon breeder for Sakata Seeds America, acknowledged the flavors of the newer cantaloupe varieties aren’t quite the same as Western shippers. The seed company introduced the LSL Infinite Gold in 2015 and has several potential releases in the pipeline that it hopes have an improved flavor profile. But breeding for multiple traits isn’t easy.

“It’s very difficult to breed any cantaloupe that is a strong performer for the grower and brings the desired flavor for the consumer,” Frahm said. “Using Infinite Gold as a model, our goal is to make LSL varieties that are also enjoyable to eat and adaptable to difficult melon-growing regions.”

To improve the consumer experience, the California Cantaloupe Advisory Board increased the minimum maturity standard to 12 degrees brix—or 12% sugar—for ESL and LSL varieties in 2019, said Patricio, the board chairman. The old standard was 9 brix.

Before harvest crews begin picking, he said they sample melons in a 10-by-10-foot square, and 80% to 90% of the fruit must exceed 12 brix. The measurement is a composite, taking into account that fruit closer to the crown ripens earlier than what is on the shoulders.

“That makes some of the crown fruit 14 to 16 brix,” he said. “If you don’t have some sort of standard or metric, you end up where you have people cutting fruit that isn’t ripe. If you’re not running 12 brix on your cantaloupe, you’re not delivering a good product.”

(Vicky Boyd is a reporter based in Modesto. She may be contacted at vlboyd@att.net.)